A palette of colors. A pearl of the Mediterranean Sea. An explosion of pastel shades, blue sea and small streets to be explored strictly on foot. This is Procida, a tiny island treasure just a 40-minute hydrofoil ride from Naples and yet off the mass-tourism radar! Nominated Italian Capital of Culture 2022 Procida recalls the Portofino of the past and retains a pleasant authentic atmosphere.

During a time of increased awareness of over tourism, the island that is an almost untouched gem is a delightful alternative for travelers looking for a lesser-known destination in Italy. In three days, you will have plenty of time to discover the most beautiful places in complete tranquility. But a week is the ideal time for a fulfilling holiday on Procida, which will allow you to admire the most beautiful places, enjoy the beaches and go hiking.

Procida an Island of Culture 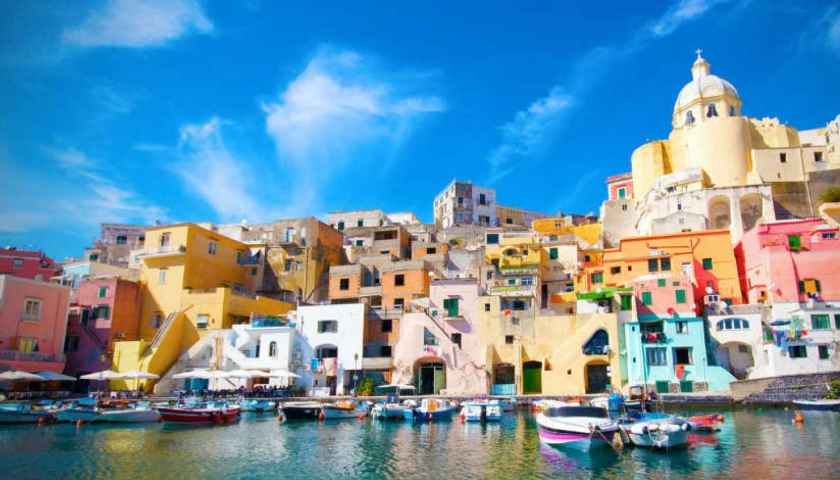 Procida is the smallest of the islands in the Bay of Naples, chosen by directors and writers as a backdrop for their masterpieces. The current name of the island derives from that of the Roman era Prochyta. Today, Procida is an untouched gem and bathing resort that retains the authentic charm of a traditional fishing village.

Culture is an integral part of its long history. Here, for example a great novel is set, “The Island of Arturo” written by Elsa Morante, who describes Procida as follows:” My island has lonely streets close between ancient walls, beyond which there are orchards and vineyards that seem imperial gardens. It has various beaches with light and delicate sand, and other smaller shores, covered with pebbles and shells, and hidden among large cliffs. Among those towering rocks, which overlook the water, seagulls and wild turtledoves make their nests, whose voices, sometimes plaintive, sometime cheerful, are heard especially in the early morning. There on quite days, the sea is tender and cool, and settles on the shore like dew”.

Cinema is also at home in Procida, which has been the location of great masterpieces, first of all Il “Postino” with Massimo Troisi and then the same film version of “Arthur’s island” and the noir with Matt Demon “The talented Mr. Ripley”.

When in Procida forget the car 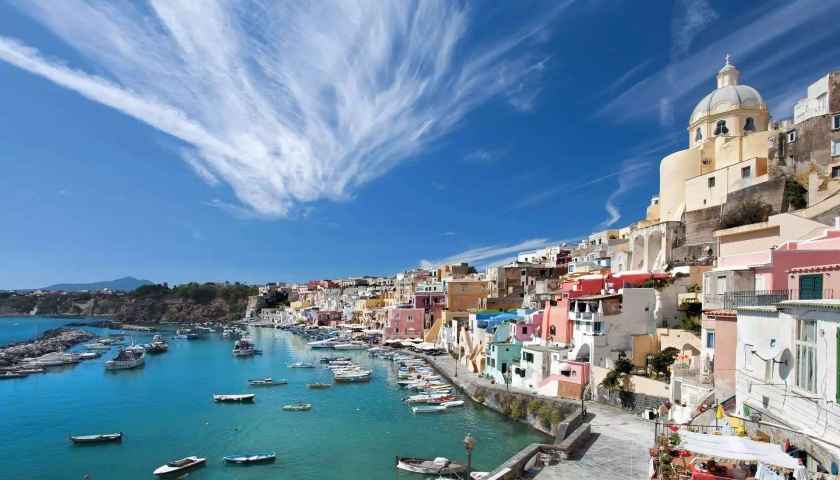 This is definitely an eco-friendly island: for most of the year, in summer as well as on holidays, there is a ban on disembarking with your own vehicles or motorcycles. Driving is simply not an option on Procida unless you're a local resident. However, it is possible to travel by public transport – taxis and SEPSA buses – and by motorcycles, mopeds and bicycles for hire.

Where to stay on Procida 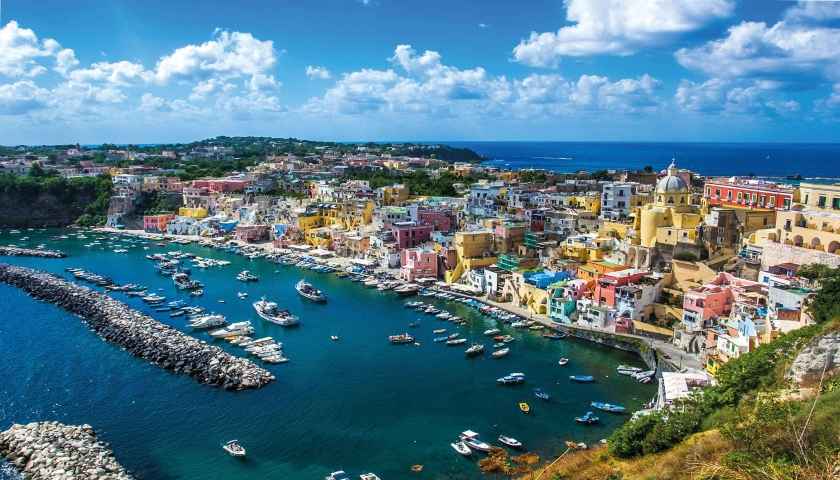 Considering that there are many restaurants within walking distances of almost all the Procida hotels, here are a few of the top recommended hotels you should try out. Use our advice and links to choose your hotel in Procida. Many of the links point to our affiliate partner, Booking.com, which is Europe's leading secure reservations service.

What to eat on Procida 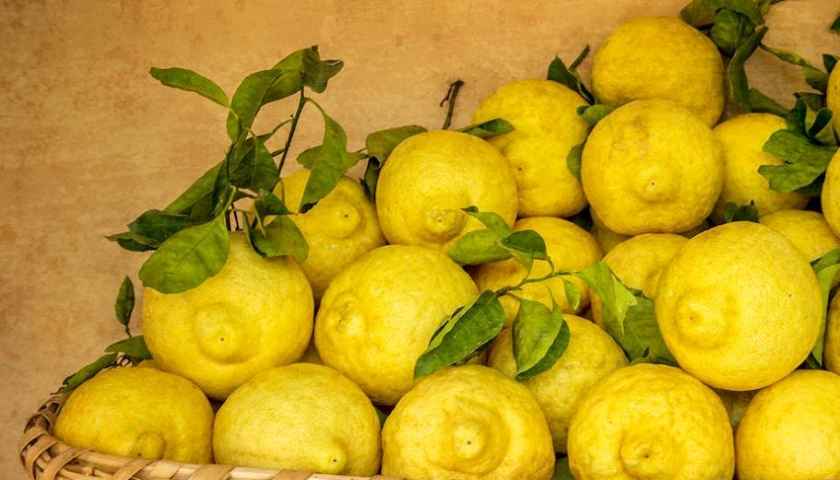 What to eat in Procida? The local cuisine is mainly based on seafood, and it could not be otherwise given that we are still talking about an island. Whether it's spaghetti with sea urchins or bonito, fish takes up most of the menu pages in the various restaurants on the island. But there are certainly alternatives: one above all the Rabbit alla Procidana. Are you hungry now? Then continue reading, with the best typical dishes, characteristic foods and local gastronomic specialties of the Italian Capital of Culture 2022.

Although it is a typical citrus fruit of the whole Campania coast, the Procidani lemons deserve a mention. The cultivation of these lemons is on a family level, in the sense that many families own some trees. The fruits are medium-large, under the peel the white layer is nice spongy and greedy to eat, so much so that these lemons are called "bread lemons". Delicious to eat sliced, without sugar, or to be pressed, or to flavor recipes (as we will see later).

Legend has it that the sailors of Procida were very keen to bring the island's lemons with them, both for emotional reasons but also for necessity: in fact, one of the diseases that most affected the sailors on board was scurvy, caused by a lack of vitamin C, easily circumvented thanks to the presence of citrus fruits.

The Procidano artichoke is a type of Roman artichoke which, in addition to being eaten fresh in various preparations, is particularly suitable for its preparation in preserves, in oil. First the artichokes are blanched in water, then put in oil with white wine vinegar, garlic, chilli. After maturing for about two months, the artichokes can be eaten. Another typical dish based on Procida artichokes is a first course, the paccheri pasta with artichokes.

The most easily replicable in any part of the globe, even if eaten in Procida it has a completely different flavor thanks to the aforementioned lemons. The Procida salad is made of local lemons, plenty of garlic, onion, extra virgin olive oil, mint, chili and salt. The lemons must be cut into coarse pieces lightly pressed with a fork to flavor the sauce with the lemon juice. To eat alone or with fish or meat dishes from the island.

Vegetables and greens are among the many assets of this wild island. Here the aubergines are prepared in the parmesan way but also takes on the other name, that is "alla procidana". The aubergine slices (preferably the long ones) are passed in egg and fried; subsequently, they are passed in the tomato sauce, sprinkling each layer with abundant grated cheese. Therefore, the dairy component is missing, compared to the classic parmigiana, but the way of consumption also changes: instead of cutting it in the middle, it is advisable to eat the Procidana aubergine parmigiana one layer at a time. Ah: the natives also recommend letting it rest for a whole day before biting into it. If you can.

The motherhood of these spaghetti with sea urchins is claimed above all in the South and in particular by Taormina (Sicily) and Procida. here the recipe widespread in Procida, which includes abundant spaghetti (or linguine), a considerable number of properly cleaned sea urchins, garlic, parsley, white wine and extra virgin olive oil.

There is the Procidana-style rabbit, but also the Ischia-style rabbit (that is, from the nearby Ischia). The two preparations are almost similar and include rabbit, which has been an inhabitant of these islands since time immemorial, as the main ingredient. Rabbit alla Procidana, unlike that of Ischia, is cooked over very low heat, if possible in an earthenware saucepan, together with its ingredients: tomato, rosemary, white wine, extra virgin olive oil, garlic. The rabbit, say the people of Procida, must be small.

Where to eat on Procida 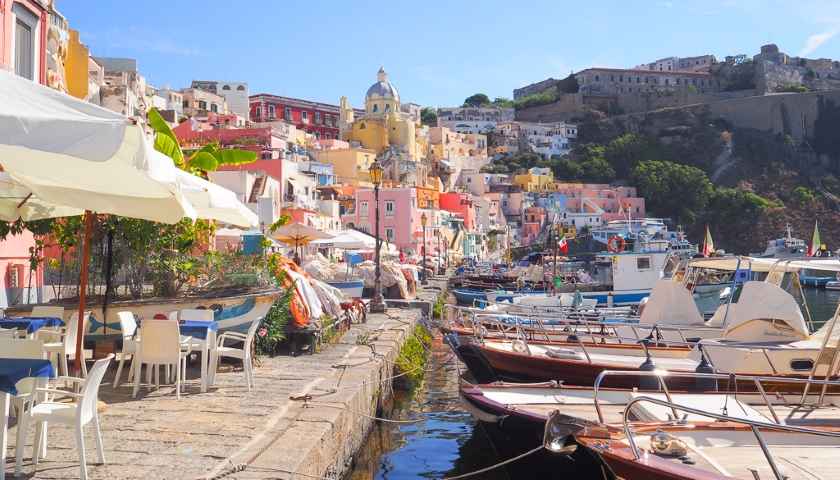 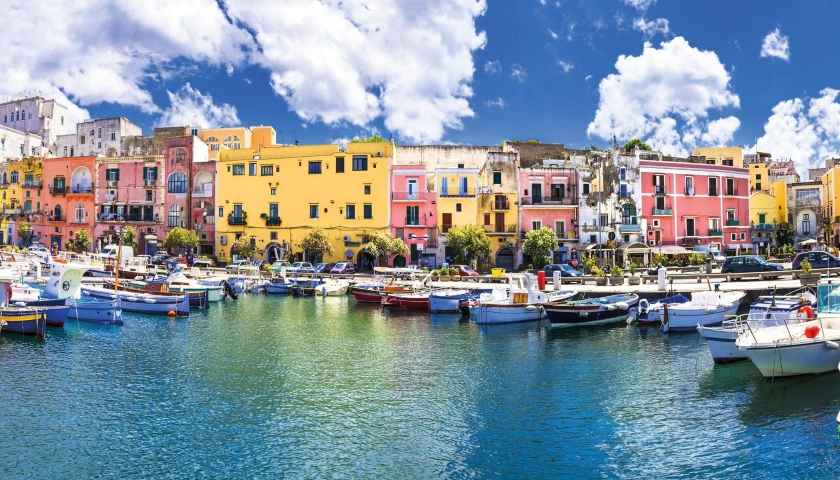 Planning to visit to Procida Island? From your first trip together for a romantic honeymoon, to multi-generational vacation to bond with family and friends or an immersive getaway to explore this hidden gem in Italy, our job is to help you create a trip that truly celebrates the reasons why you travel.

With years of expertise in providing exclusive and personalized vacations, Nancy Aiello Tours can create a private journey to suit each travelers’ individual preferences. To get started fill out our easy Trip Inquiry form. One of our dedicated Travel Specialists will work with you to plan and book the perfect luxury vacation