Visiting Italy during the Christmas season can be one of the most interesting ways to get a look inside Italian culture. Especially from a North American standpoint, where the ubiquitous Christmas tree is normally replaced by the presepe (nativity scene). I have always spent the Christmas holiday in Italy and will do so again this year in Rome, so in the spirit of the holidays have composed a list of where to spend Christmas in Italy. 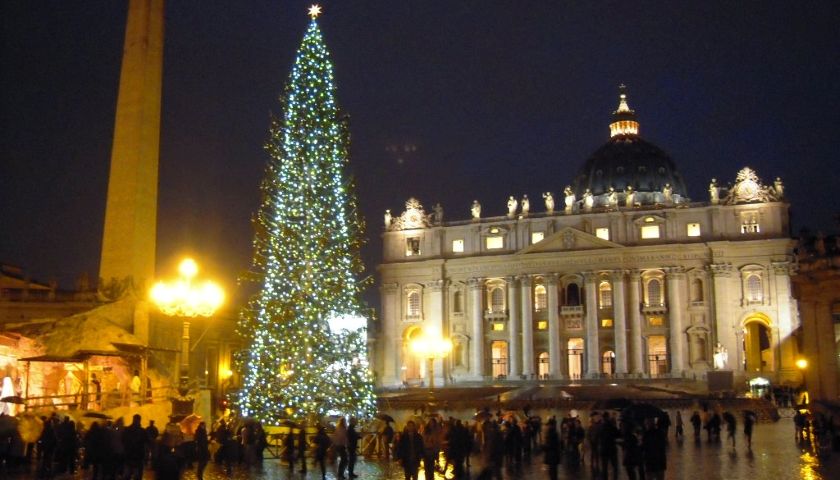 The Christmas season in Italy begins with Christmas Eve on December 24 and continues until Epiphany on January 6. The Nativity Scene is the most important symbol of Christmas in Italy, even more than Babbo Natale- or as he is popularly known, Santa Claus. The Italian Nativity scene or the crib is called presepe. During the whole season, every house and every church has a Nativity Scene occupying an important position in the Christmas display. In fact, Christmas trees were not a part of the decoration in Naples and Sicily until the middle of the last century. 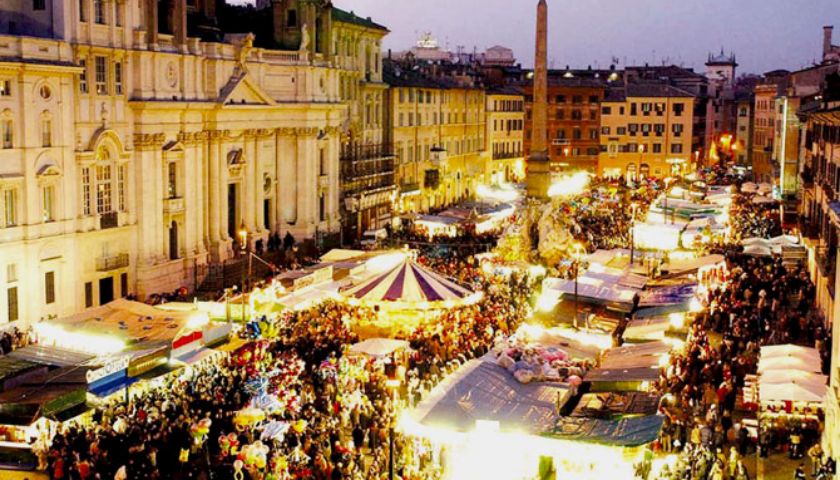 Christmas in Italy is an incredibly theatrical production that goes on for a month before, and several weeks after, the main holiday. Most local markets start popping up after December 8 (the holiday of the Immaculate Conception) and remain until January 6 (the Epiphany). From the smallest towns to the biggest cities they are a great place to mingle with locals, learn about regional handicrafts, and sample seasonal delicacies.

One of my favorites is the Christmas market in Piazza Navona in Rome – it's as much kitschy fun as a Kansas state fair. Apart from the Epiphany Fair in Piazza Navona, there are many specialty markets where you'll find great holiday shopping. Here are a few I recommend, because even if you don't buy anything, a stroll around the nearby streets will amply repay your efforts.

In Florence, the most well-known market is the German market in Piazza Santa Croce, otherwise known as Mercato Tedesco di Natale. Here Florentines and tourists alike wander the aisles of decorated booths selling everything from German strudel to traditional pottery to handcrafts and Christmas candy for the kids. At the end of the market is a large “carousel” for adults (it spins very slowly): here you can partake in some hot spiced wine and a bratwurst.

Up north in Venice, the annual market in Campo Santo Stefano runs for the three weeks before Christmas -until December 24th - and features stands with handmade toys and crafts, as well as regional culinary specialties. 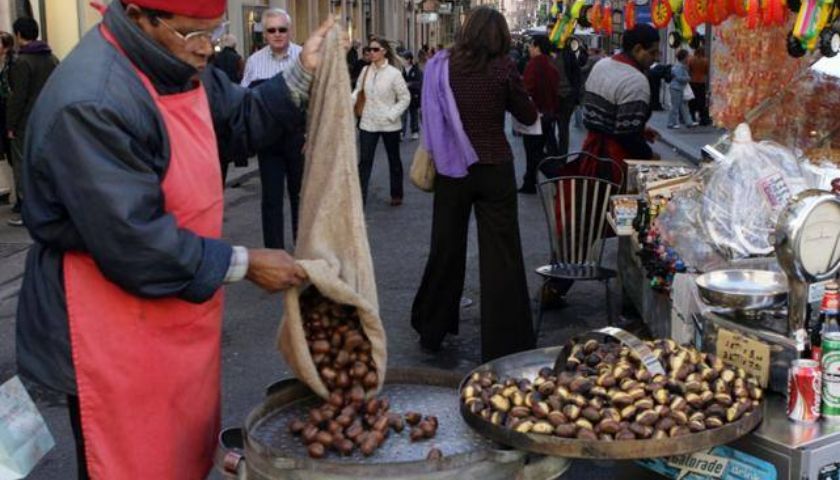 To me winter always starts up when I see vendors on the streets roasting chestnuts. Just follow your nose and ask for a bag, which should cost about 10 euro. Pandoro, typical of Verona and panettone, typical of Milan, are buttery yeasted cakes sold in big boxes. In Naples try struffoli, which are balls of fried dough drizzled with honey and sprinkles and then stacked into a little pyramid. 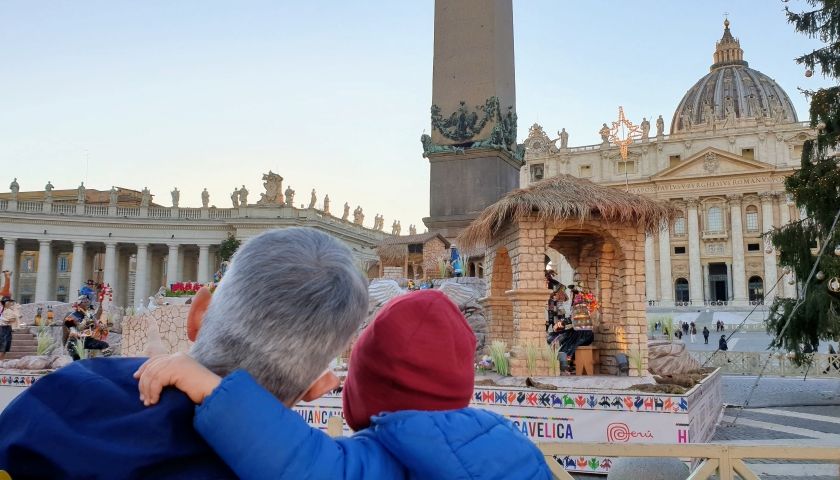 The nativity scenes are very beautiful and an important part of Christmas in all of Italy. Instead of looking for Christmas lights (though you will see those around as well), you can make a whole trip out of viewing the nativity scenes set up in various Italian cities. The nativity gets more popular the further south you go, where it seems like every store from butcher to baker has one set up.

In Rome, stop by Santa Maria Maggiore to see one of the oldest nativities in the city, carved in marble. Of course the life-sized nativity scene set up in St. Peter’s Square is also not to be missed. Also worth a visit is the Basilica di Santa Maria in Aracoeli, by Piazza Campidoglio, for their nativity and, from Christmas Eve onwards, a glimpse at the Santo Bambino. Roman children come to give thanks to this oil wood sculpture of the Christ Child.

In Naples, you’ll want to be sure to visit Via San Gregorio Armeno in Spaccanapoli. This famous street of Nativity workshops is filled with artisans creating nativity figurines. Everything from your traditional figures to Bart Simpson as a shepherd can be found here. 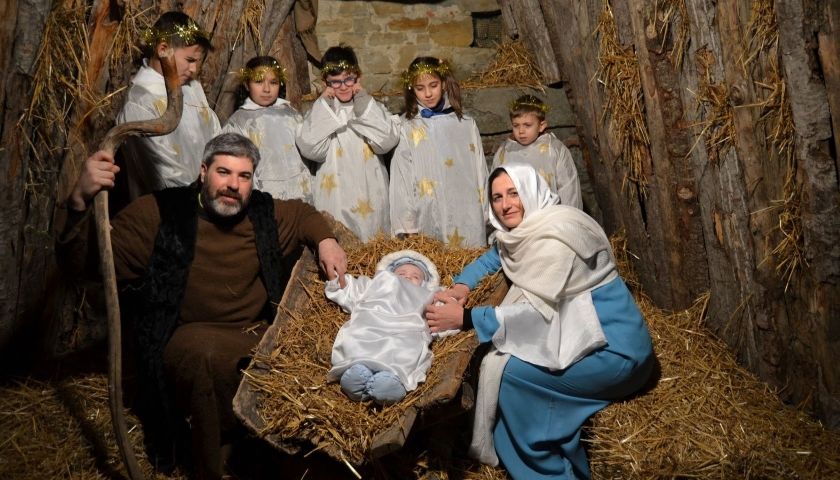 Almost every small village stages a living nativity scene on Christmas Eve, followed by midnight mass and often, distribution of food and drink.

Where to Spend Christmas in Italy: Rome & Vatican City 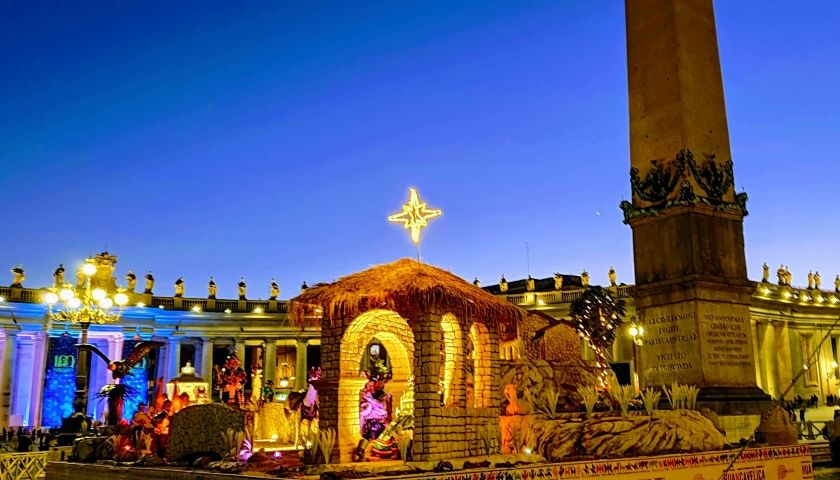 Whether you’re keen to embrace the religious side of Christmas or simply want to see the local way of life, Christmas is a magical time of year in Rome for all. The city bustles with festive twinkling lights, outdoor markets, concerts and more. In addition, Rome churches and piazzas boast beautiful Christmas decorations focused on nativity scene and some of them are real masterpieces!

Wherever you are in Italy on Christmas Eve, go to Midnight Mass. Even if it's a tiny parish church, there'll be a presepe, hearty singing and lots of ceremonial splendor. At the Vatican, the Pope delivers a Christmas Eve Mass at 10pm in Saint Peter's Basilica (reserve tickets well in advance). My favorite Midnight Mass is the one celebrated at the Pantheon; this ancient roman temple turned into a church is so rich in energy and faith that you don’t need to be Christian to enjoy that mass here.

Where to Spend Christmas in Italy: Florence 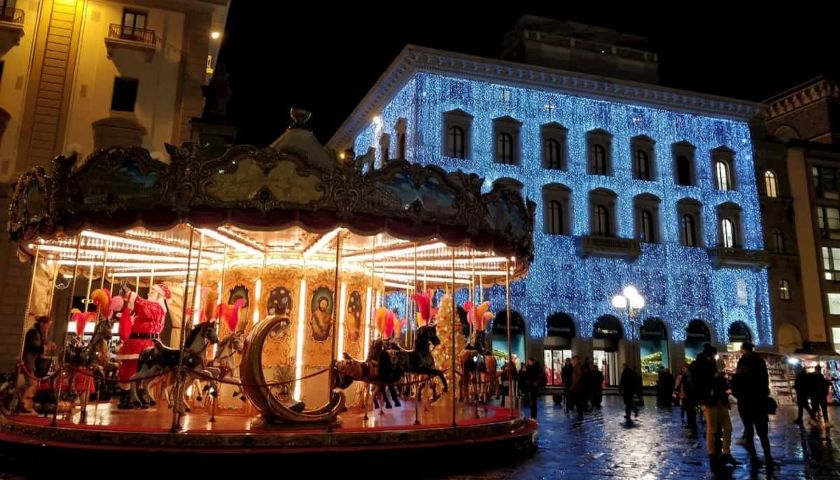 Christmas in Florence is a magical time. The city undergoes such a magical transformation that every night in December feels like a holiday. Christmas lights, in all of their elegant variety, dangle over the city’s and nearly every shop is decorated with colorful Christmas wreaths and ribbons. In the Piazza della Repubblica, a giant tree stands in the center, and next to, it spins the bright red and gold carousel.

Where to Spend Christmas in Italy: Venice 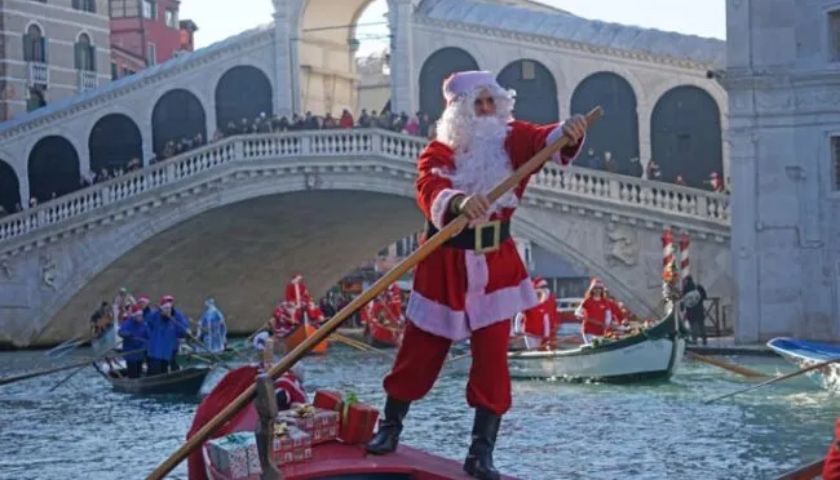 In Venice it’s easy to get swept up in the magic of Christmas. No matter how many times you have been to Venice, you’re bound to be amazed by the figure of Santa Claus arriving by gondola to distribute goodies, and Midnight Mass on Christmas Eve in St. Mark’s Basilica is enough to make any trip to Venice worth it. Thousands of people, local and tourists pour into town and the demand for accommodation is higher than usual, therefore it is advisable to check hotel prices and make reservations ahead of time.

Where to Spend Christmas in Italy: Naples 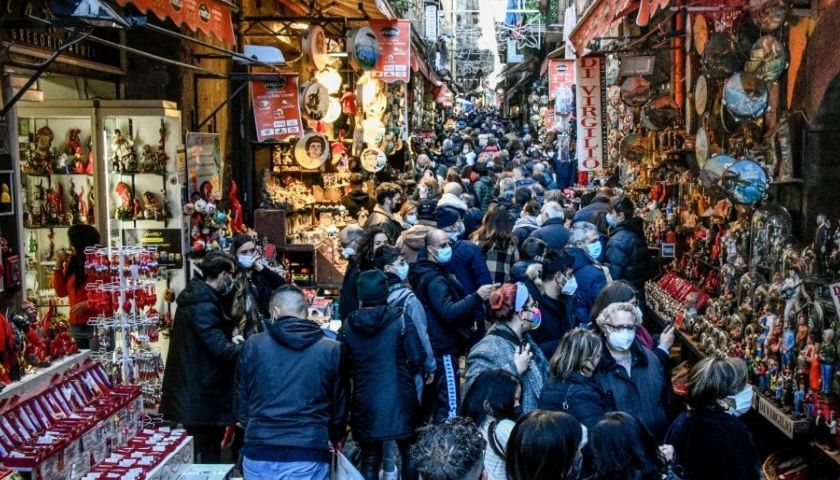 Via San Gregorio Armeno Naples’ cultural and historical pulse center,  is so named after the baroque church and monastery on this street. In the eighth century Armenian nuns fleeing from the Byzantine Empire reached Naples with the relics of the Bishop of Armenia, St. Gregory. At the centre of the city, connecting the modern vibrant city with its ancient heritage, Via San Gregorio Armeno has seen the footprints of every local of Naples and every tourist to the city for centuries.

However, its greatest attraction is what makes this already vibrant street come to an almost magical state of existence. It is the little shops selling the terracotta nativity scenes with quaint figurines. Rightfully called “Christmas Alley” year-round, a special time to visit this street, for obvious reasons, is just before and during the Christmas season.

Where to Spend Christmas in Italy: Sicily 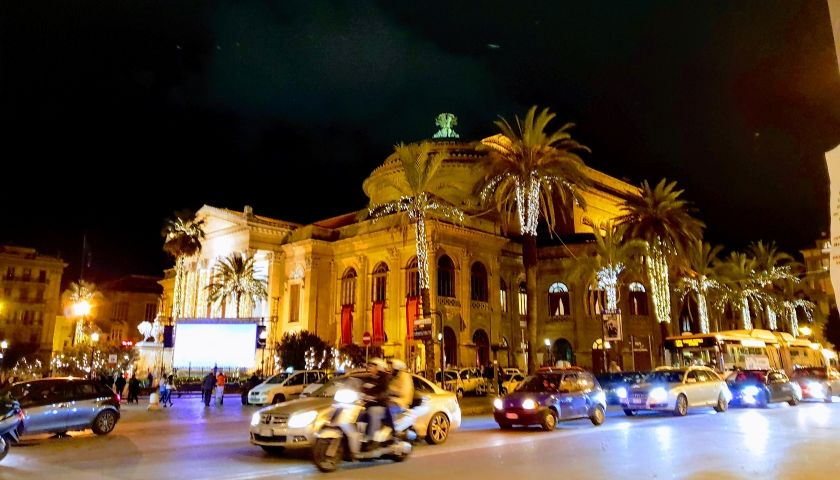 Where to Spend Christmas in Italy: Trentino-Alto Adige 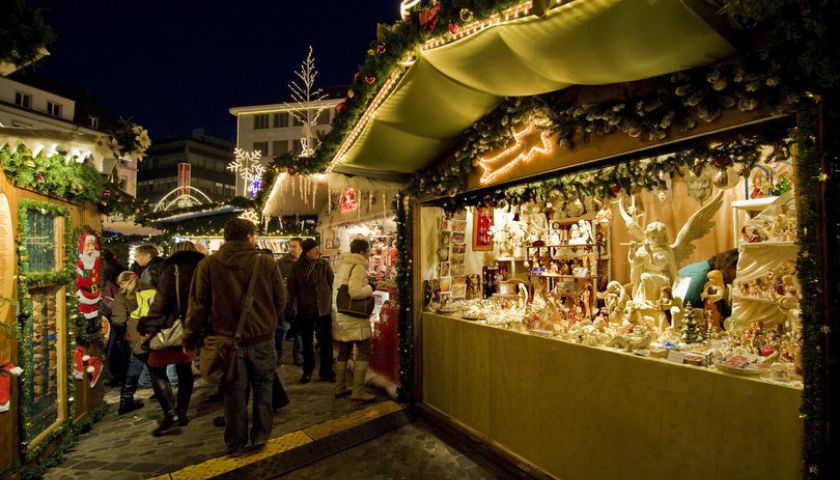 Sadly, Christmas has become a commercial opportunity in Italy too, but since time immemorial the mountain communities have been staging wonderful outdoor markets for this season. All manner of wares are sold, including tacky toys and crass video games, but the emphasis is on exquisite hand-made artifacts to be used as gifts or as decorations.

The atmosphere is best after dark, when hundreds of lights create a festive atmosphere and huge clouds of steam hover over the cider and cioccolata of which everyone partakes. My very favorite market is in the picture-perfect town of Merano.

Is a Christmas trip to Italy a good idea for 2023?

A trip to Italy during the holiday season is a fantastic idea. With even lower crowds, relatively pleasant winter weather, and the joys of the Christmas season in full swing, your Nancy Aiello local travel agent can help you enjoy all that the season offers. We aim for authenticity, relaxation and enlightenment, all served up with plentiful attention to details.