Known as piccola Roma (little Rome) for its importance in imperial days, Verona is all about art and architecture, history and great love. It's hard not to fall in love with this beautiful city. And, of course, like any Italian city of note, one can feast on authentic Italian cuisine and creamy gelato! 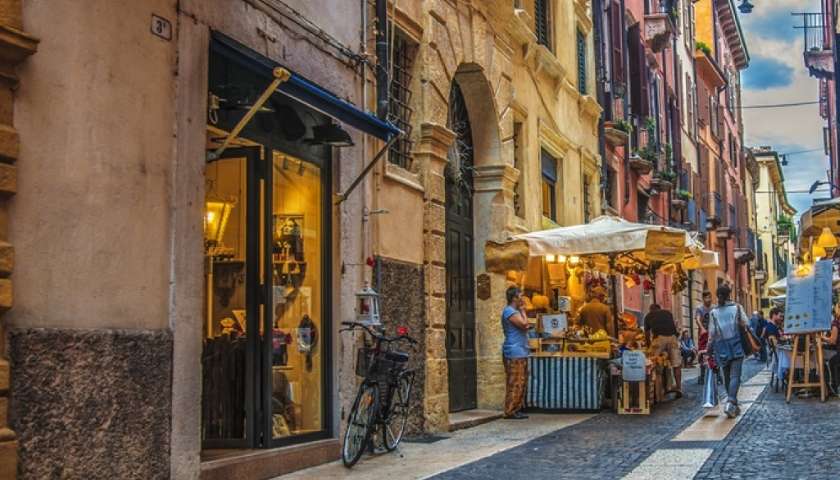 The Verona of Romeo and Juliet is a city of romance. It’s a place where love is in the air, and you can feel it in the streets, cafes and restaurants. And the minute you step foot in Verona, you’ll understand why Shakespeare chose this charming Italian city as the setting for his timeless, tragic love story.

However, Verona is much more than the setting for the famous family feud. This beautiful and historic city makes an excellent home base for exploring the Veneto region, or the perfect day trip from nearby Venice. Either way, you have to see Verona and I’m going to list the very best of Verona to explain why.

Tour The Very Best of Verona

The entire ancient town of Verona, Italy, has been named a UNESCO World Heritage Site, and with good reason: some of the most well-preserved examples of Roman and medieval architecture are found here. The Basilica of San Zeno Maggiore is one such example, as is the pink marble Roman Arena amphitheater, circa 30 AD - still used today for open-air opera, theater and fairs.

What’s fantastic about some of the ruins in Verona is that some are still functional, being used today and so there is plenty to please the architecture/history buff in all of us! Whether travelers associate Verona with great food, incredible historic sites, or the works of William Shakespeare, Verona is definitely worth a visit! Here’s what newcomers should see in Verona, and what to do while you’re there. 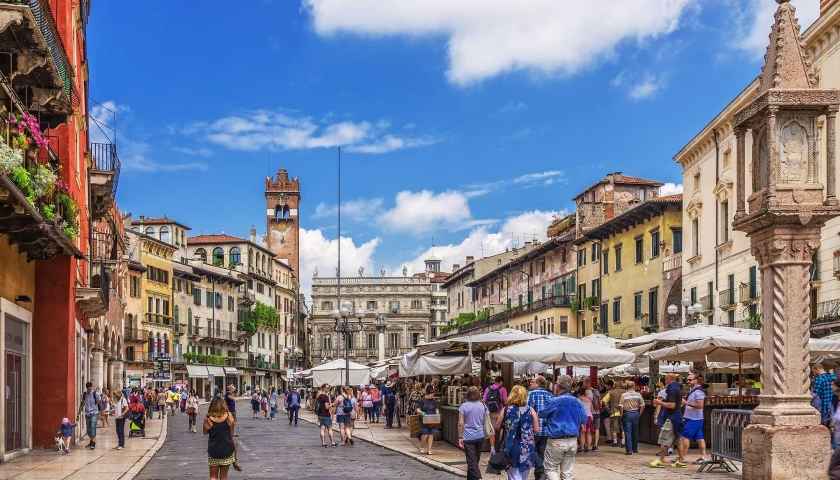 Verona is a wonderful city to walk around, to soak up the atmosphere, to grab a coffee and people watch, and to shop. Spend your first day getting the feel for the place. Head for the Piazza delle Erbe in the center of town and wander the market, admire the fountain, smell the herbs on the market stalls. For a real sense of the city layout, climb the looming 12th century Lamberti Tower.

When you've had enough coffee here, head through the arch Arco della Costa - if the whale bone falls on your head you are a just person. Don't worry, it didn't fall on anyone else either and it's been there for centuries.

Now you're in Piazza dei Signori, the heart of political toil and strife for centuries. Admire the buildings - mainly the work of the 14th century Lords of Verona, the Scaligeri family. Visit their nearby, rather spooky tombs, then head off across the river to the Castelvecchio, another impressive stronghold built by the Scaligeris. This is now a wonderful art gallery. For more shopping head to Corso S. Anastasia. 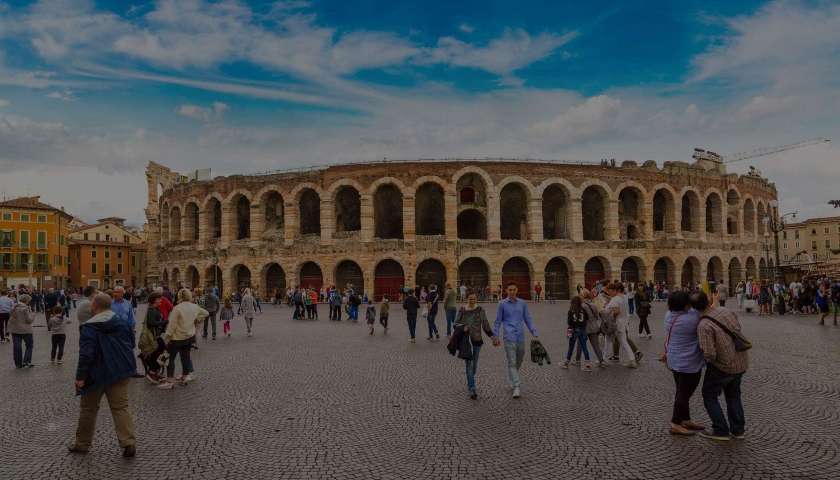 Although most famous for its history of art, lovers and feuds, Verona is a much older city than that, having been settled by the Romans in 89 BC. The third largest Roman Arena in Italy is here in Piazza Bra and it still hosts performances. Luckily these days tastes run to opera rather than gladiators. If you're here in summer, definitely buy a ticket, take a cushion and experience entertainment as its been watched for millennia.

A smaller but still impressive Roman leftover is the Roman Theatre across the river. This, too, still hosts performances on summer nights and also has an extensive collection of the Roman artefacts found in Verona, displayed in the Archeological Museum. The city still has some of its Roman gates: Porta Bra and Porta Borsari, and Gavi Arch is worth a look.

Not so ancient but just as interesting are Verona's many churches. Don't miss the Duomo di Verona, the 12th century cathedral. 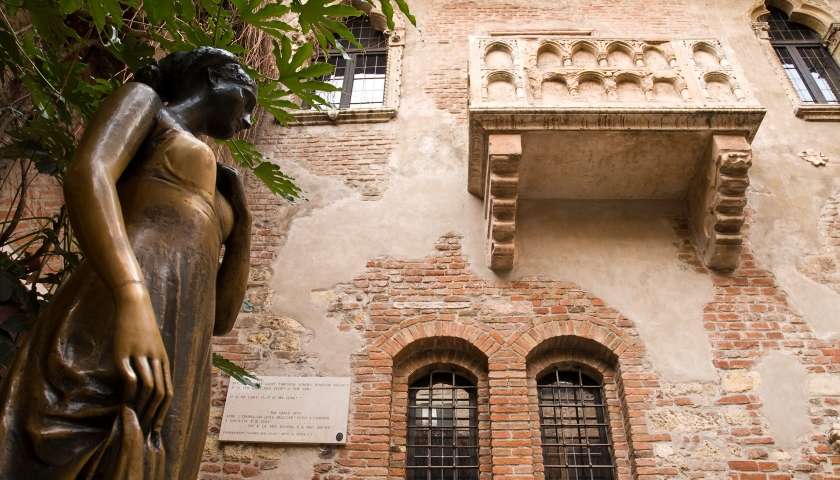 The inescapable fact and fame of Verona is that it was home to the world's most famous lovers: Romeo and Juliet. Whether they really lived or not is still debated, but it seems likely they did and were members of the warring Capuleti and Montecchi families. Take pictures of Juliet’s balcony and according to the tradition rub the shining breast on her bronze statue for good luck!

One of the most popular pilgrimage sites in the city is Juliet's house (Casa di Giulietta); also, Juliet's tomb at the Museum of Frescoes G B Cavalcaselle. For diehard fans, search out Romeo's house and visit Bra Gate through which Romeo was exiled. If you're really serious about love, you can get married at Juliet's house or, indeed, at her tomb.

Maybe wine is more your thing? No problem – Verona is in the Valpolicella wine region, and you can either sample some of the goods in restaurants around the city or tour the extensive vineyards of Verona's famous wine country.

Verona has so much to offer - from Roman gateways to Gothic churches, from Pisanello's amazing medieval frescoes to elegant Renaissance palaces. You'll meet the Scaligers, a bunch of tyrants so scared of the people they ruled that they built a covered bridge as an escape route from their castle to the other side of the river. You will see their pompous tombs - but you'll also see an outdoor bustling market and a fine Roman theatre. Throw away the awkward map and explore Verona like a local. 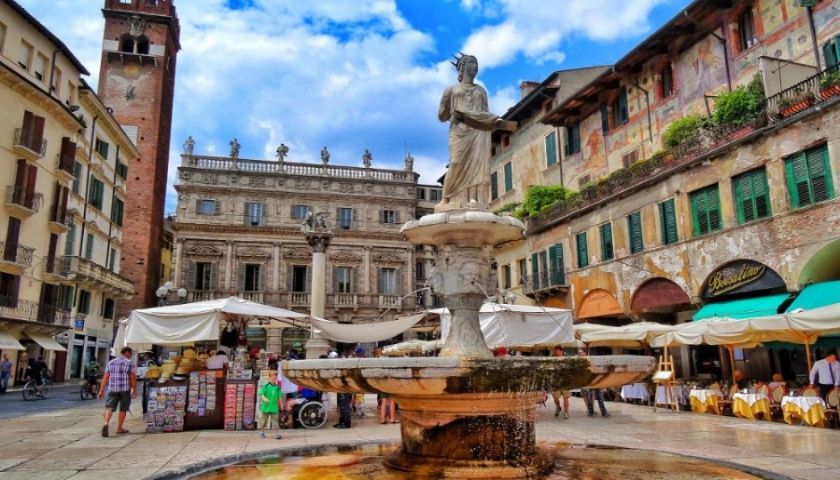 When in Italy you must visit a piazza. The Piazza delle Erbe (former Roman Forum, now a pretty market square), is considered by many to be one of the most beautiful piazzas in the country. Take that larger and more popular Italian cities! What makes the Piazza delle Erbe worth seeing is its ornate central fountain Fontana di Madonna Verona, and the surrounding palaces that stem from the Renaissance era.
What to Do: Shop at the Piazza delle Erbe’s daily market by day, and then relax at an outdoor caffe in the evening. 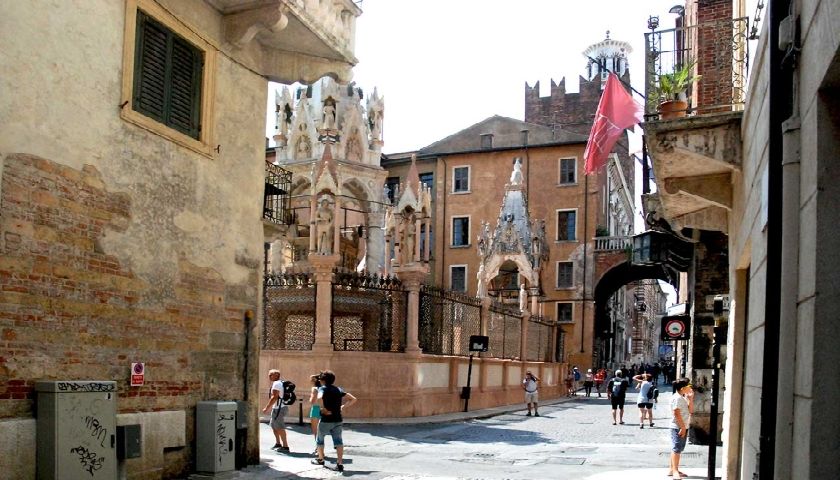 The Scaligeri family ruled over the beauty of Verona during the 13th and 14th centuries. They had a lot of power… and money… and their tombs prove it! After you’re done shopping at the Piazza delle Erbe market, wander around the corner to see what many consider the finest example of Gothic art; the burial site of the Scaligeri family.
What to Do: Head behind the tombs and pay a visit to the beautiful Church of Santa Maria Antica. 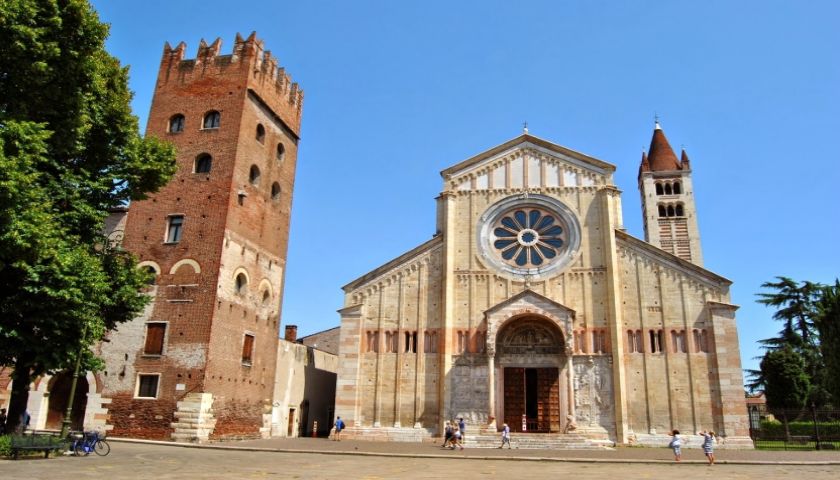 This 4th-century basilica inspired the many other churches you will find in Verona and was a continual work in progress itself until the 12th century. The church is quite a site to see, with its beautiful facades and stained-glass windows. For your particular viewing pleasure, you must take in the 48 panels of biblical history that make up the basilica’s famous 11th century bronze doors.
What to Do: Learn how the Italians celebrate religion by attending an authentic Roman Catholic mass in this magnificent building. 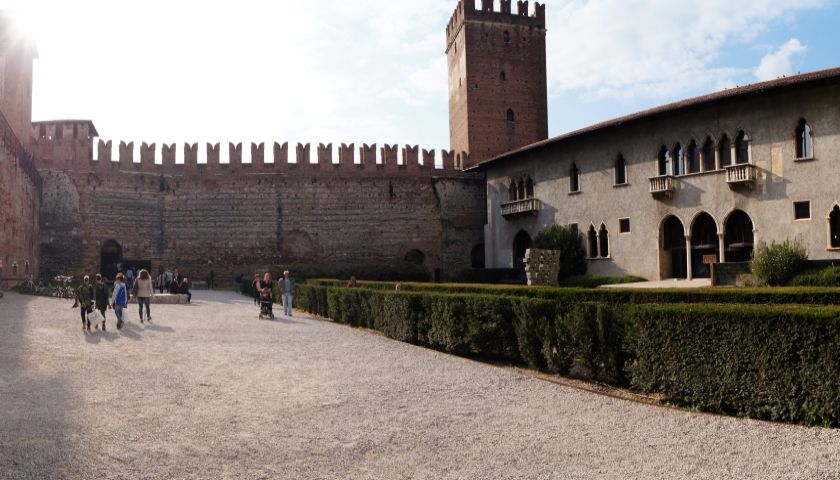 You will find a perfect example of a medieval fortress when you visit Castelvecchio. Built in the 14th century, Castelvecchio is a huge encampment with four buildings, a fortified tower, seven additional towers, and some unbelievable fortress walls. The fortress is a museum itself, taking its visitors back to a time when rulers called such magnificence “home”.
What to Do: Visit the Museum of Art located inside the Castelvecchio to appreciate the works of Italian masters Bellini, Mantegna, and Pisanello among others. 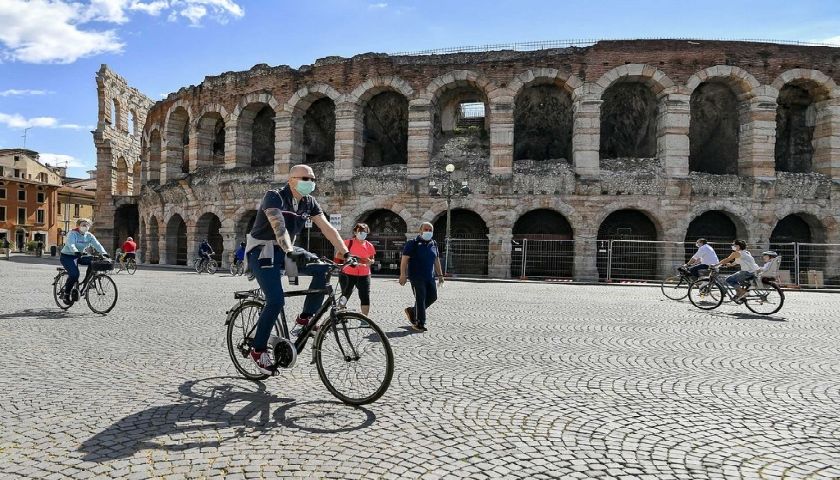 Ancient Rome buffs take note! The Arena Verona is a 1st century amphitheater that the city still uses today! You could argue that the Arena Verona inspired the famous Roman Colosseum, not only because the two look similar, but also because Verona built its arena first. This ancient ruin is one of the best preserved in the world, so you definitely want to see it.
What to Do: Enjoy famous Italian opera under the summer sky during Verona’s Summer Opera Festival held in the Arena di Verona.

The Very Best Restaurants of Verona

You’re probably hungry after crossing all the things to see and do off the above list. I know I am! I love Italian food; but I’m Italian, so I’m also biased. Verona traditional cuisine includes risotto, bean soup, stewed meats, polenta, and fish but be aware that horse meat is considered a local specialty. For those who can’t stomach the idea of eating horse, you’ll want to avoid ordering anything with the word “cavallo.” Here is a shortlist of some of the best restaurants in Verona.

Tried many gastronomic and Michelin starred restaurants but this one was definitely one of the best I ever been too. Superb - friendly and attentive service and beautiful carefully prepared food. Highly recommended to anyone!

Even though this is a pizzeria, you are still going to be expanding your notion of Italian food. Pizza isn’t just flat and topped in Verona, at the Corte Farina, the chef serves a rolled pizza called a sfilatino, which is filled with zucchini and cheese inside. You have to try this! It is super-yum!

Looking for a farm to table lunch? This is the right address for you. Al Bersagliere is the typical local tavern in the heart of Verona where you can enjoy simple and traditional fares cooked with love by Mrs. Marina. The cellar, dating back to the 1200 with its wealth of Valpolicella wines is a must visit that will enrich your experience. 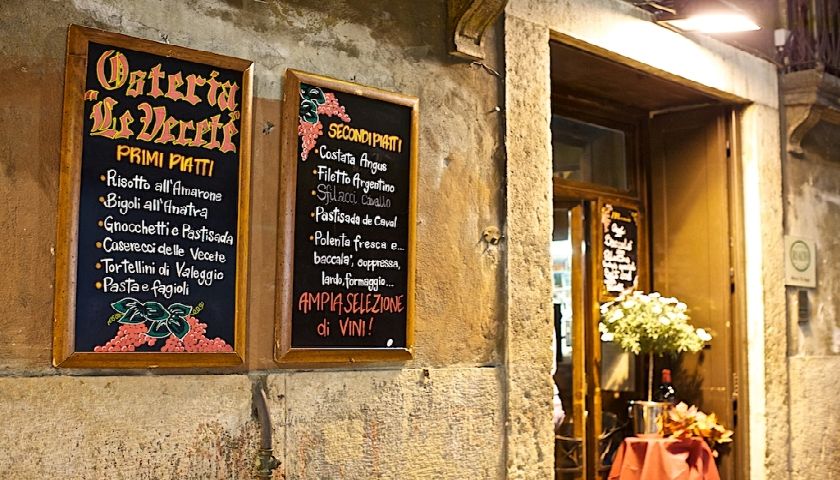 If you’re looking for some of the more traditional dishes of Verona, such as the risotto or stews, check out the Trattoria le Vecete. Authentic Verona cuisine is prepared in this charming restaurant, with rib-sticking meals sure to satisfy even the hungriest of people.

This historic restaurant shows the strong ties between Verona and its vineyards. The cellar boasts a history that has its roots in the 16 century and boasts one of the most comprehensive wine lists in Italy with over 4,500 labels. The food served is traditional Veronese using the freshest local produce.

Verona is a charming city. It is breathtaking, historical, and friendly. It’s easy to get into Verona via train (it’s less than 1.5 hours from Milan, and just over an hour from Venice). If you are pressed for time, you can thoroughly enjoy Verona in one day. If you’d like to take your time, you can enjoy Verona for several days. The city is worth whatever time you can afford it.

Whether you’re touring Northern Italy, on your way to or from Venice, or simply wanting to get away to a little slice of Italian heaven, our local travel designers would be delighted to create a truly personalized trip to Verona which perfectly matches your wishes and requirements.